It’s starting to get to be that time of year again (at least in Texas) where the weather is great for backyard movies.  I used to just hang a sheet on the shed at our old place but when we moved into current home I needed to come up with something different. We no longer have the same wall space and now have a sloped backyard which means we need to put the screen somewhere toward the bottom. After some Google searches I felt like PVC pipe would be the most economical and easy to assemble/disassemble option.

The pipe and fittings cost approximately $54 before tax. Blackout lining ranges from $7-12/yd at Joann’s.  However if you download their app there is almost always a 40% off coupon you can use.  I think the lining already happened to be on sale when I got it.

I used my chop saw to cut mine.

STEP 4: Sew your fabric! You’ll be making pockets for the poles along the side and top.  Each pocket is about 3″ wide flat.  The blackout lining doesn’t fray so there’s no need to turn under your hem.  I left the bottom of the screen completely unfinished.

I would suggest completing the two top sections and then one side.  That way you can then put the screen onto the frame and pin the last side pocket to ensure that it’s tight enough.

STEP 5: Put it all together!

Once put together this screen is essentially a giant wind sail so I drilled some holes into each of the feet so I could insert tent stakes into the base to keep it in place.  If you live somewhere extra windy you might also want to anchor it with some cord.

If I were to make one of these again, I would probably consider adding some velcro or a strap to the screen to make it easier to wrap up and carry.  But for now this works just fine.

I recently watched a video by Make Something TV that provided a tutorial to make your own letter board.  These boards had been popping up all over my Instagram and I decided to give it a try rather than spend close to $60-100 on buying one.

My first attempt was a failure.  The spacing was all off, some letters would fit in certain areas of the board but for the most part they wouldn’t fit or they would pop out at random times.  I was frustrated given I had already spent a good amount of time cutting my plywood strips and meticulously gluing them down.  I took a few days off of the project and then decided to come back to it with more mathematical precision.  Using some simple algebra I realized my strips were too narrow which caused the spacing for the letters to be inserted to not be uniform.  Below are the steps I went through to make my DIY Letter Board.

Step 1: Cut the hardboard to the size you want your finished letter board to be.  I went with 16″ x 20″ which seemed like a pretty standard size that allowed to write longer messages if needed.

Step 2: With my 1/4″ plywood I first cut it down to 16″ wide sections.  Then using my Micro Jig GRR-RIPPER I then cut 3/8″ strips.  I can’t tell you exactly how many I cut but you can probably count them in one of the following photos.

Step 3: Using some DAP Rapid Fuse All Purpose Adhesive I then carefully glued the strips individually to the hardboard.  This glue is great because it really only takes about 20-30 sec to stick.  I used a letter as a guide to figure out the spacing.  As I was holding a new strip down in place to glue I would place the letter across the strip and the one below, sliding it from left to right to make sure the spacing was uniform.  This step took some time even with fast drying glue.

You can tell that even though I tried to be careful, the strips eventually became unlevel near the bottom.  I wasn’t too concerned though since this part was going to be covered by a 1/2″ overlay of the frame.

I decided to use flannel instead of felt mainly because the black felt at the fabric store was much thicker than the other colors.  I figured felt gave the same look and since it’s a woven fabric would probably be more durable for this next step.

Step 4: Starting at the top and lightly coating sections of the strips with spray adhesive, I used two separate drywall taping knives to push the fabric into the gaps between the strips.  I found that it was helpful to keep one knife in the previous section as you used the second to push down the next keeping it from pulling out you previous work. 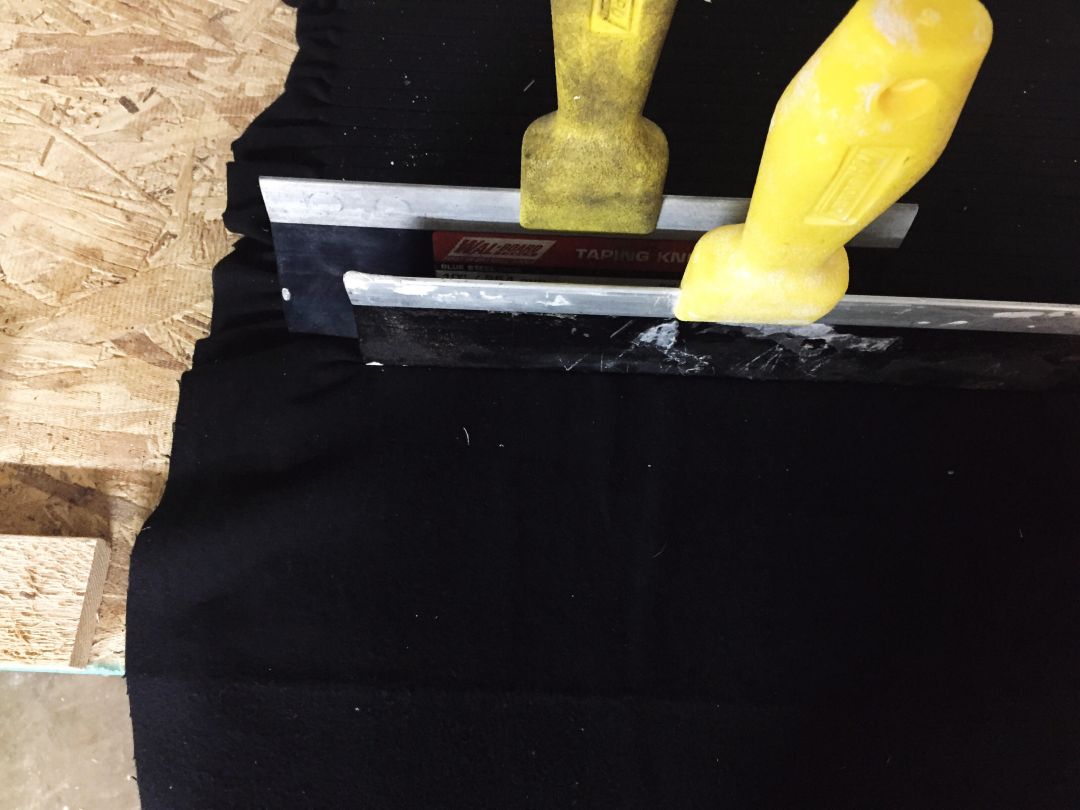 Step 5: Once all the fabric was in place I trimmed the extra fabric that was hanging over the sides.  Again this didn’t need to be too perfect since it was going to be covered by a frame.

Step 6: Make a frame.  This was the first frame I ever made so I’m not too much help here.  I used some scrap cedar I had and cut it down to 2-3″ wide strips.  I cut a 1/2″ rabbet using my table saw and then mitered the corners on my miter saw.  At this point my enthusiasm for this project was waning so I just wanted to get this frame put together as quickly as possible.  I used wood glue in the joints, used my brad nailer to nail the corners together, put some clamps on it, and called it a day.  I’ll learn keyed miters another day!  After the glue had some time to dry I stained the frame.

Step 7: I forgot to take photos of this step but if I had it would show a picture of the back of the frame with the back of the letter board placed in it.  I hammered a couple nails along the edges to keep it in place.  Then I added a sawtooth picture hanger bracket to the top so I would be able to hang it.

Most letter boards have 4 strips to every 1″ letter spacing whereas mine only has 2 strips.  I’m okay with this because the letters fit perfectly and that’s all that really matters to me.  I ordered my letters off Amazon in both 1″ and 1/2″ sizes.